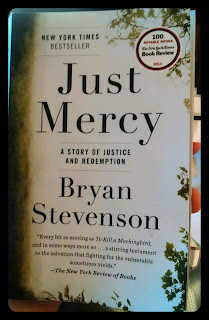 I have sorted my files, stored the glue sticks and scissors, discarded all memos about meetings, placed the chairs atop the tables, and locked the door behind me. Another school year is over, and I am ready to recharge my batteries.

Anticipating the summer, I had built a stack of books I have been wanting to explore but never found time or energy to read amidst the essays, practice AP tests, or student projects that grew uncontrollably from the bottom of my in-basket on my desk during the school year. As most people tend to do, I choose books which open doorways to worlds beyond mine. Some of the worlds can be wildly fantastical while others are starkly realistic.

Bryan Stevenson's Just Mercy captured my attention one evening as I was exploring Amazon for books that would pique my interest. This book made it to the top of the stack immediately. Maybe it was the subtitle "A Story of Justice and Redemption" that intrigued me.

Bryan Stevenson is an attorney who founded the Equal Justice Initiative, an organization which challenges the justice system's punishment and treatment of the poor and disenfranchised. This group has advocated for people wrongly condemned to death as well young people who were tried as adults then were sentenced to life in prison. Throughout Just Mercy Bryan Stevenson reconstructs one of his first cases as a lawyer, confidante, and friend to Walter McMillian, a man condemned to die for a murder he did not commit. The novel is more than just the account of McMillian; it is the account of a young lawyer who found his purpose in life while exploring the meaning of justice and mercy.

I always use little sticky notes to mark passages for, as I explain to my students, "over-arching themes," insights that extend beyond the text to connect to the audience or to make a larger point beyond the context of the book. (One day I may actually stop doing this.) I firmly planted that first sticky note on page 14 during Stevenson's introduction to the true stories he was about to recount. Stevenson begins this novel by establishing his motivation for taking his path in life. He recalls when his grandmother imparted a message to him after one of her numerous, everlasting hugs:

" 'You can't understand most of the important things from a distance, Bryan. You have to get close' she told me all the time."

This is what Stevenson does throughout Just Mercy. He brings readers in "from a distance" to tell us Walter McMillian's story, Marsha's story, Charlie's story, and the story which I found incredibly heartbreaking, that of Joe Sullivan, a severely mentally-disabled man who was convicted at the age of 13 of sexual battery and was sentenced to life in an adult prison without the chance of parole. By the age of 39 he was confined to a wheelchair and is still in prison.
I could not help but "get close" to these people through Bryan Stevenson's passionate and brave efforts to help them. I have to admit there were times when I asked myself if all of these stories could possibly be true, but unfortunately they are. I found myself personally researching many of the people Stevenson includes in the book in an attempt to discover what eventually became of them.

"We are all bodies of broken bones." Stevenson references this Thomas Merton quote, then reflects himself:

"We are all broken by something. We have all hurt someone and have been hurt. We all share the condition of brokenness even if our brokenness is not equivalent. I desperately wanted mercy for Jimmy Dill and would have done anything to create justice for him, but I couldn’t pretend that his struggle was disconnected from my own. The ways in which I have been hurt—and have hurt others—are different from the ways Jimmy Dill suffered and caused suffering. But our shared brokenness connected us.”

Bryan Stevenson's book has taken me on this unexpected and thoughtful journey, helping me "close the distance" between my life and the broken people Stevenson encountered throughout his mission in life. It is important that all of us take time and energy to close the distance with others for that is the only way we can make a difference in the world.

I would encourage you to take a moment to watch Bryan Stevenson's TED TALK and perhaps even read his compelling book. You will not regret either choice.