FOR SAFETY, SECURITY, AND LOVE 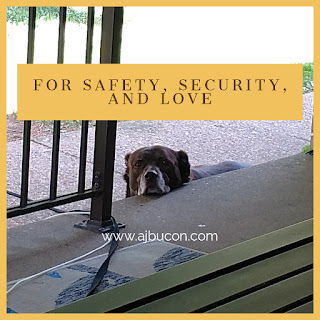 Few people doubt that pets are family. The brevity and richness of their lives with us offer an insightful glimpse into who we are as individuals. Oftentimes they reflect the dynamic and personal connections among our family and friends, creating mirrors of our personal experiences throughout the seasons of our lives.

Two days after Christmas last year I took Mom down to the DMV in Moundsville to renew a driver's license that either did not need renewing or could have been done by mail. Life can blur together sometimes. While we were down there, I asked her if she would mind taking a short ride up to the Marshall County Animal Shelter to see this adorable lab-mix named Charlie.

My constant companion of fifteen years, Ranger, had died two summers ago, and while I still miss his being at my side, I felt a calling to rescue another dog. No puppies for me though. This dog needed to be a bit removed from the puppy stage and clearly have four paws planted in adulthood.

Two hours later Mom and I were headed back to Wheeling with a brown, skinny, cauliflower-eared dog frantically panting with excitement. By the time we arrived home, Charlie had crawled out of the rear section of the Explorer and into the back seat, his new blue leash still attaching him to the metal hoop in the rear. Much like a young child, Charlie wanted to be near us, but he could only move so close before the leash pulled tight.

I made sure that his leash stayed attached when we arrived home. I had so little confidence in my ability at my age to chase after a dog who could very well scamper into the woods if I were to turn my head for a moment. Charlie yanked me around the yard as he sniffed and marked his territory. 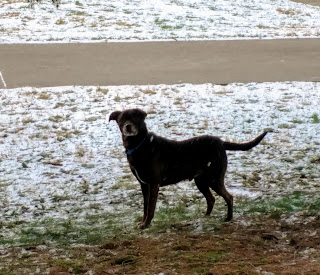 I spent the remainder of the winter and better part of spring attempting to teach Charlie to walk on a leash. His exuberance for walking was wearing me out though. He always wanted to sprint from one bush to another, pulling me along with him and unfortunately choking himself when I could not keep up. I had to find a way to walk him safely and securely for both of us to make it down the road and back in one piece. I watched many YouTube videos about how to teach an older dog to walk on a training lead, a longer fifteen foot leash. I could not worry about how Charlie and I appeared while walking down the street, stopping and starting, abruptly turning left and right, reversing direction at a moment's notice, and dropping the leash to the ground to call him back to me. What a humorous video that would have made with some chaotic carnival music playing in the background!

I was on my second dog harness when eventually I gave up on the idea of having Charlie walking directly by my side a la Cesar Milan. I had to free myself of this perfect picture that Charlie simply had to walk beside me as Ranger had done. I began to find more and more dog trainers who claimed that as long as a leash hangs with a controlled slackness, it was not that big of a deal if Charlie strayed a little or walked in front of me. I continued to use the fifteen foot training lead on walks so that Charlie could safely explore bushes and yards with freedom while I remained secure on the sidewalk. We found a compromise, and our walks are wonderful now.

The beginning of August had arrived, and I started dreading going back to school. I was enjoying my traditional respite from the daily grind of the high school classroom. I would visit Twitter and Facebook frequently, finding many of my former students preparing to go to college as freshmen or returning as sophomores, juniors, seniors, or grad students. I also found the parents of these students posting about the emotional challenges of this entire process as they watch their children depart for school. Despite the excitement of packing the car or SUV to head to campus, a melancholic tension develops in that connection among all of them. Anytime we leave the ones we love we worry about whether or not they are going to be OK, we wonder how long it will be before we see them again, and we hope and pray that they will miss us as much as we miss them.

I began to think about how these types of life moments are akin to my efforts over the past half a year with Charlie. Initially he was that child I wanted to keep close, to teach how to walk, how to behave, and how to love. No matter how much I wanted him to walk by my side, Charlie had an inner desire to search and to journey beyond the path I may have wanted to travel. As the months passed, he became that young adult, the one who may be entering his or her junior or senior year in high school or attending college hours away from home. Charlie's harness and fifteen foot training lead allowed him that security to venture out on his own, comfortably knowing that I was always there. These young adults in our lives enter the world on their own wearing a harness constructed of values, love, and life skills, hopefully aware we are nearby, holding onto an invisible leash of unconditional love and connection.

A personal surprise happened on the Saturday before school begins for me. I left the house around noon, telling my mother that I was leaving Charlie outside on his tie-out lead. He loved his summer on the porch and the freedom to move between the sun and the shade. Mom said he would be fine and would bring him inside if he barked or if she wanted to take a nap. Two hours later when I returned, Mom told me that she had gone to sit on the porch only to find that Charlie's tie-out lead was wrapped in a pile by the door and that Charlie was basking confidently untethered in the sunny side yard just panting and looking at her. Charlie was not going anywhere. He knows where home is, just as all of the people do in our lives despite how much we long to pull them close to us, despite how much we struggle with letting them go to travel a road of their own choosing. 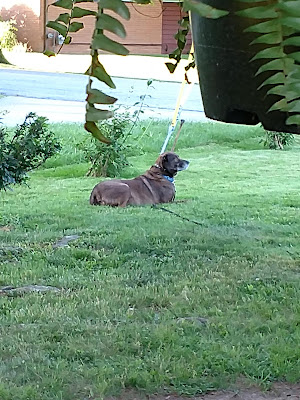 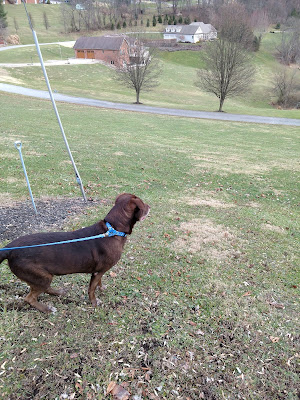 Best wishes to all the students and their families
as they begin a new chapter in their lives this year.
Enjoy every moment of the journey. 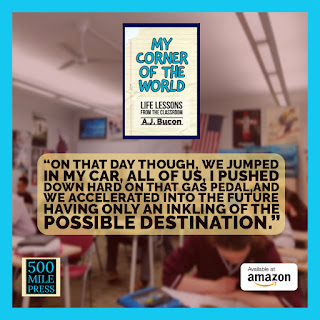 My Corner of the World is still available
at Amazon and other book sellers.
If you are interested in a personal copy, please contact me
through my website or at school.