I will bet many people have a collection of songs, a collection that is the absolutely perfect mix for traveling down an Interstate Highway or an unknown country road. We all need at least one song, right? A song that embodies the escapist mentality in each of us.
I would have been about nine-years-old when I heard Jim Croce's "I Got a Name." I am positive that my younger self did not realize the tragic irony of this song released the day after Croce died in a plane crash on September 20th, 1973.
In the song, the speaker is traveling a "winding road," one that is not an easy journey by any means. It is his journey, though. He is "like the singing bird or the croaking toad," both of whom have sounds that the world may group together as the same song, not realizing both have "a name" or a voice that is distinctively theirs.
Croce's haunting voice echoes defiantly about living a dream, one which so many people have kept hidden. He is "moving on down the highway" despite his own personal doubt and the dubious naysayers around him. He realizes that life's journey waits for no one, and he is determined to follow his dream even if he does not ultimately achieve it. At the very least, he has lived his life under his own purpose.
Feeling like only yesterday, decades ago I packed my car and moved to North Carolina in search of my dream of becoming a teacher. Times were challenging then in West Virginia, but I was tired of waiting for an opportunity. I spent those decades discovering so much about myself, the country, and the world. Interstate 95 had opened my road to meeting many fascinating people and having incredible experiences.
When I returned to Wheeling, I felt another dream calling me. I have always wanted to write. Sure, I had written here and there occasionally, but I wanted to write on a regular basis. "Moving me down the highway," I wanted more. Life was too short to continue wondering if I could or I should. I decided I would.
First came the Time and Space blog, which is still going strong for five years now. Then, I wrote my first book My Corner of the World. I never thought I would have the intestinal fortitude to labor joyously over a project for over a year. When these roads converged, I created 500 MILE PRESS. I wanted a publishing name. Why not? 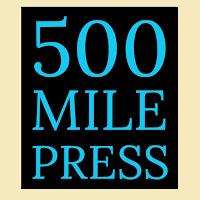 For over thirty years, I have journeyed "500 miles" from Wilson, North Carolina, to Wheeling, West Virginia, and back again numerous times a year. That is what 500 MILE PRESS is: my journey. I have a new part of my journey, and "I could share it if you want me to. If you're going my way."
I am happy to announce that my newest book Sunday Mornings with Coffee, Time and Space Retrospective will officially be released this Thursday, November 12th, 2020. You will be able to purchase the book and Kindle version exclusively on Amazon.
This is kind of quirky, but I have added MY CORNER STORE to the webpage. You can click here or go to the menu at the top. I hope that you take some time to browse the store. Maybe one or two items will appeal to you.
I hope to see you on the highway! 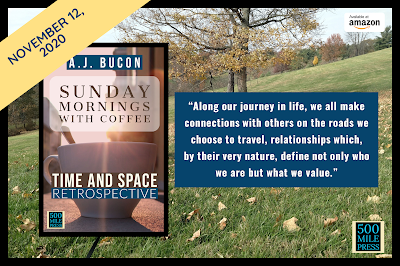