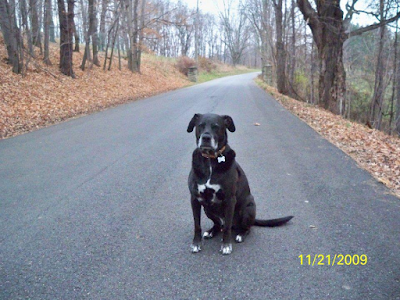 I cover Ranger with his old bath towel, the remnant of many outdoor baths in the Carolina sun, then I move around Ranger’s stuffed toys to cushion him from the hard cold wall which secures his bed in the corner of our bedroom. I kneel down beside “old man” to brush his salt and pepper graying hair with my hand, gently massaging his arthritic bones which jut outward from his coat. He relaxes as I soothe the aches and pains of his aged body. I think I see a smile there.

Such is my daily ritual. Back in the day when Ranger was a more explosive pup, I would quietly yell, “Night, Ranger” from my bed, knowing that he would hear me, rustle in his bed, then move to a more comfortable position on his own. Now I still utter this nightly to myself, not yelling, but being more soft-spoken so as not to disturb Ranger since he has quickly fallen asleep.

I remember that day when Ranger and I met; I cannot forget certain moments like that. I had been searching for months for the right dog. I knew I had absolutely no patience for a puppy - too much work. I wanted a lost soul - a  stray, a discard, a treasure who had wandered off course, a soul who could bring me back to a place more grounded. The foster parents for Ranger claimed that he was a gentle, fun-loving lab-mix as they related his story to me. Apparently he had wandered up to an elderly woman’s porch who could barely make it outside her front door much less rescue a stray dog like Ranger who had planted himself on that same porch, waiting for someone to offer him food and water. 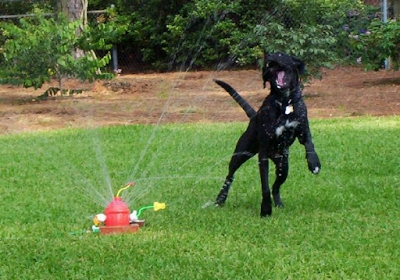 His foster father gave me a leash to take Ranger for a walk. I had already witnessed Ranger’s version of “playing catch” with the man’s son who would throw the ball for Ranger to fetch only to have this precocious older pup grab the ball then do circular wind sprints around their backyard, playing keep away instead of returning the ball to the person who threw it. Quite the comedian. As I walked Ranger for the first time, I half-expected him to pull me down the street. He didn’t. We walked side by side from tree to tree where he relieved himself on the foliage in that area. But then we stopped. As I squatted down beside him to test our connection up close, Ranger, as if on cue, fell to the ground and rolled over on his back, looking up at me for that belly rub all dogs love. That was all it took; Ranger came home with me that day.

Ranger is tired more often than not nowadays. I am not sure whether it is his front legs or his back legs; all I know is that the walk to the door leading outside has become laborious for both of us. My patience is always welcomed in his weary eyes, those that struggle to find the path ahead. I walk with him, tethered by leash to my long-time friend, step by step, side by side, just as we did that first day we met. We walk slower now, more patiently, more retrospectively.

We moved from North Carolina to West Virginia, an uprooting of my life whose effects ripple through me today. After travelling a full day in my Explorer full of clothes, pillows, memorabilia, and other necessities, Ranger and I stopped at a hotel for the evening. I lifted him down from atop the towels and suitcases where I had placed his dog bed so he could be the king of our caravan. I do not remember what effect the move had on him, but he seemed to know the effect on me as I struggled to sleep that night, still feeling the emotion of the day: the packing, the goodbyes, the loading of my life onto a truck which headed in a different direction. On previous road trips Ranger had always slept on his bed beside me just as he had done everywhere, every day, every evening since that first night so many summers ago. That night though, Ranger remained overly attentive, observant, restless. I thought that perhaps the day had been too much for him as I coaxed him onto my bed where I tossed and turned, carefully avoiding bumping Ranger so that he could sleep, uninterrupted by my anxiety.

Midway through the night I dreamt that someone was tapping me on the shoulder, eventually placing a hand on me to keep me still. I had asked God to strengthen me on this journey as I left my former home. I opened my eyes in the darkness, not expecting to see anyone there but more so to acknowledge where I was at this time. I found Ranger resting his entire head on the crux of my bent leg. He had never been a dog who wanted that kind of contact while sleeping; he would move to another spot if I tried to rest my head on him or simply sleep beside him. Ranger was there at this time, head atop me, protecting me from any danger beyond a locked and bolted door, from an unknown fear reverberating beyond the beat of my heart. It was where we were at that time; it is where we are at this time. 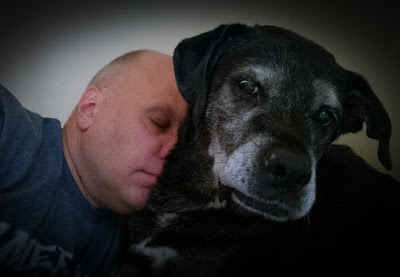 Tonight I cover Ranger again with that towel, adjusting the stuffed toys so that they are within his reach to provide comfort while he sleeps. Ranger had a better day. We still walk slowly around the yard, side by side. He follows the same path, unable to fully see any new areas with his failing sight. He may not hear my “good boy” as well as did when his hearing was so much better, but he does recognize the loving sentiment of a big hug when we return inside for the day. I do not want to go to sleep right away; I pull down a pillow from my bed, wrap myself up in my Carolina Panthers blanket, then slowly fall asleep beside Ranger. I do not put my head on him because I know he would move so I sleep a foot away, confident that he will remain right where he is for the night.

Along our journey in life we all make connections with others on the roads we choose to travel, connections which, by their very nature, define not only who we are but what we value. We may wander winding paths with friends we have known since our childhood, navigate the calm and turbulent rivers with family members at various stages of our lives, or meander a random countryside at sunset with a loyal dog. We visit those places side by side with our travelling companions, quite often not realizing where we have been or how far we have journeyed until we stop to glance behind us to recognize who we were and who we have become. We can grab a pillow, a warm blanket or old towel, then lie down to rest, sleeping peacefully beside those we love. 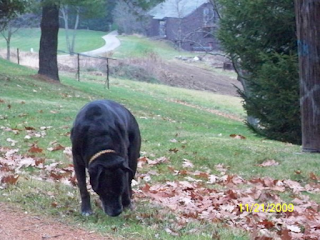 Ranger turned 15 years old in February and is doing just fine for his age, hanging in there after a challenging winter. Ranger still loves his walks around the yard, but we do not make it farther than that anymore. He does "demand" a little more chicken or ground beef mixed with his "senior" dog food, but that is just fine with me. Who wouldn't want a little more chicken or beef with their kibble?