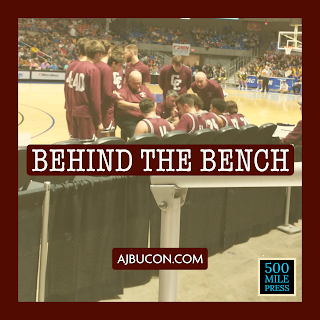 My grand quest has rewarded me with the best seat I have ever had at a high school basketball championship tournament: directly behind the bench. Well, not quite directly, but close enough. I hope the old woman in the over-sized yellow security jacket does not walk down the long bleacher stairs to find me here.

My quest began two days earlier, shortly after Central Catholic's Maroon Knights completed their monumental comeback in the second half against Grafton in the state quarter-finals, landing in a rematch of last year's state championship with Shady Spring for a spot in the finals. I was at home, watching the game stream on the sports network. My wifi is spotty at times, but the part that really pissed me off was the feed that had the announcers completing the play-by-play before the on-court action actually occurred. Seriously! I needed to see the game live: unfettered, close-up,  the way I watched all of the home games I attended this year.

The three-hour drive from Wheeling to Charleston was a grind, but I arrived at the coliseum at the halfway mark of the game before Central's game. Perfect timing. After I emptied my bladder, bought a program, grabbed some salty popcorn and an orange Powerade, I pulled down my hat and slipped on my readers. I reviewed the memorized lie that I was sitting in Section 110, Row M, Seat 4 instead of the actual ticket location on the opposite side of the floor: Section 135, Row M, Seat 9. I readied some wrinkled bills, including a crisp twenty to use as a possible bribe, then covertly began my "older gentleman lost" look.

I strolled past that old woman security guard playing around on her tablet. I shuffled down the stairs, gripping the metal arm rail with my sweaty palm as I looked side to side for any open swath of seats until I found three halfway down. "Excuse me, young man," I mumbled to a couple who were actually about my age. "Are these seats taken?" For good measure, I spilled some popcorn and pretzel salt all over me and ended up sitting in the wrong reserved section for the next hour, unbeknownst to anyone of importance.

The orange Powerade surging through my veins imbued me with even more resolve when seven minutes remained before the Central game commenced. I stepped down to the main floor, where I looked dejectedly at the reserved WVSSAC signs taped to the front row of seats before turning back to a vacant second-row spot, the better place for an onlooker, an observer to the lionhearted last stand of the Maroon Knights.

How can any sports fan not appreciate the chess-like precision that encompasses a great basketball game? How can any beating heart not appreciate the small school vs. the large school confrontation, the David and Goliath biblical drama backdrop? The game did not disappoint as two teams who met over a year ago returned to play again, one intent to reassert dominance and the other prepared to prove the naysayers wrong. But after the ball was tipped, everything was pushed to the background as the game moved to the forefront. The game was like games the sports world has seen repeatedly. One team jumps to a lead until the other returns to tie the game then takes the lead. The first team plays catch-up until the final seconds tick away, and the last shot bounces off the rim. Unfortunately, the game did not end well for Central.

My popcorn bag rested crumpled beside my empty Powerade bottle, coarse salt remnants scattered around my seat behind the bench. I watched as the Central student cheering section slowly broke apart and scattered, making room for the next school. I checked my Twitter for likes and replies that had been riddling my feed with people asking for updates during the game. I returned the wrinkled bills to my wallet as I hoped to find something more healthy to eat later that evening. I did everything I could to not look where I should be looking: at the team. Of course, time slows down for us when we are at our lowest.

But I stopped all my anxious avoidance and remained in the moment. I wanted a seat behind the bench for a reason. I stole my way down those stairs not just to watch the game up close. To be honest, the view near the bench sucks. It just does. Coach Mel stands the entire time. The bench crew is always jumping up when a three-ball is shot, ready to thrust three-fingered fists into the air. And it sucks when the players come off the floor looking exhausted and frustrated when the game is not going their way. No one really sees those expressions when sitting in the prime spectator seats on the other side of the floor.

I will keep my seat right here, as uncomfortable as it seems to be.

You see, closer is always better. From this spot, I see more. I see the coaches interacting with all players as a group, as individuals, and as a bench. I see the hand movements and faces during the timeouts, but I have no idea what is being said. I see the Gatorade water bottle sitting five spots down from the player who needs it the most and wonder if I can bring it to him. Up close, I see the celebrations when victories are snatched from defeat and when losing feeds desperation. I see the underclassmen who want to walk in the path of the seniors but need to carve out a story of their own. I see the faces of the seniors who have dedicated years of their lives to the sport they love. I just see more.

Rest is not an option when dreams are there to follow. Determination and perseverance mean that you go hard, you do not look at the clock, and you leave the floor with no regrets. I hope that the players on this year's team understand how much they have inspired people to do just that.

The old woman in the yellow jacket found me. "Sir, could I see your ticket? I do not think this is your seat." I was unsure if this was a dream, so I just laughed, slipped her a crisp twenty from my wallet, and politely said, "Ma'am, I will be here for a while longer." 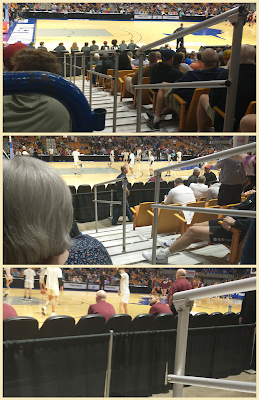 If you have not already checked out my new Etsy store, please take a look.
I will continue to add special products related to my books, blog, and podcast. 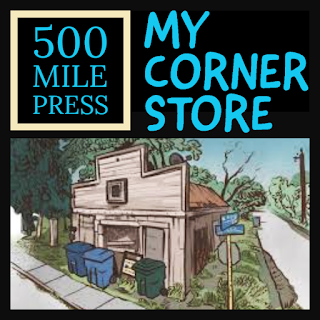