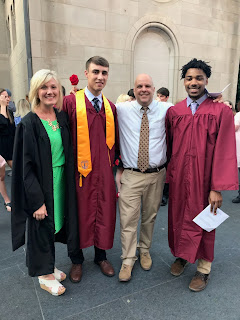 I woke up at 4:00 AM this morning, far ahead of the alarm which I had turned off before dropping into bed last night. I am tired but full of energy. Maybe I should not have taken that B-Complex supplement and Tylenol before crashing. Maybe I should have just come home sooner. I am not sure of any choices I make sometimes, but I can definitely live contentedly with them all.

Over a dozen hours earlier a mid-day nap did me in. I never should have taken that nap, but I was so tired. I do not know what I did at school today, sorting through papers I forgot to give back, the ones with random notes to seniors who would not be walking through the door next week. Half asleep, emotionally depleted, I spent the morning putting stacks of card-stock and art supplies on a back table, moving AP practice booklets from one spot to the next, counting locks from my homeroom hoping to find the one which one of my sophomores lost so she won't have to fork out twenty bucks to replace it. I munched on far too many puffy mints yesterday morning. The empty room got the best of me.

That afternoon at home I texted Betsy I was having my end of the year meltdown. Yes. I was crying. Screw you if you are laughing. Be a teacher for a year. Push and prod ninety seniors with varying levels of exasperating yet endearing personalities to the finish line. Read 90 papers on a weekly basis, searching your mind for compliments and constructive criticism until you think you are repeating yourself over and over and over again. Clean up after them because they dashed out of room without realizing the mess they have left behind: the papers, candy wrappers, Chromebook chargers, and chairs out of place.

I read through my texts and emails during my meltdown, wiping away the remnants of the emotional roller coaster of the past year. I forgot to send Becky and Mary my two goals for next year. Ugh. I started to formulate some goals. How about this? I quit. I know I have sent you those Indeed job links so many times in the past when I did not believe in myself anymore, when I did not think I could climb those stairs one more damn day, when I did not think I could explain MLA again because my students' honest efforts were tainting my understanding of referencing to the point that I was starting to believe I was wrong about everything that is my life. Facebook Messenger popped up on my phone; I found a message from a parent. I have taught two of her children with the second one graduating this year. It is a heartfelt message, one in which she appreciated what we had done this year: the scrapfolio, the discussions, the presentations. I am not going anywhere. I am not quitting. I roll off my bed, turn on some Bruce, and dress for the Baccalaureate Mass. My day is not close to being done.

I am a joker, too much of one sometimes. I hide behind sarcasm and silly quips to disorient people to avoid that feeling of being too close. Amy insisted I get that t-shirt, the blue one with bold lettering which reads "Saracasm: It's How I Hug." That's me. Unfortunately that sarcasm does not always allow for the transparency of which I should probably have more in my life. The students and faculty were gathered in the cafeteria, dressed in our robes and lined up in alphabetical order. I was joking again too much so Becky gave me a job to walk around and remind each student to sign the picture for Monsignor Ostrowski. I hate mindless jobs, but Becky knows when I need one to occupy my racing mind. So I walked around the cafeteria, stopping to remind each of the seniors I spent the long year teaching to sign the picture. Of course, they rolled their eyes, laughed because they knew what I was going to say before I even arrived, "Yes, Bucon, I signed the picture." We'd find our way into conversations about other random items: the robes, the unshaven faces, Classcraft points, and puffy mints.

A half an hour later I sat in Baccalaureate Mass. I watched as these really great kids, ones who have worked so hard, ones I have thrown out of class, ones who were angels and others who were not, ones who have proudly represented the school and community on so many occasions, ones who have achieved so much. All were dressed in maroon or white graduation gowns. I was so tired. My mind was racing, tracing back my steps from the past year. I lost myself in some odd fugue state as the students began the rose ceremony, the first group placing a collection of roses beneath the picture of a beloved classmate lost tragically four years earlier. The seniors then all took one rose, one precious rose, to carry to their mothers, a symbolic presentation which recognizes the love and sacrifice a parent makes. Those who had lost mothers quietly placed their roses at the feet of the Blessed Mother. Life tires me. I always quiet my inner cynical voice in moments like this. A moment of respect, of love, of reflection. I disappeared into my thoughts of the lives that these young people have lived and all the high and lows they have experienced, feeling a sense of pride and admiration for their having traveled so far.

"Bucon. Bucon!" someone whispered in front of me. I looked up and there is Brent, a student I have taught for two years. Brent and I have argued, he has given me the silent treatment, I have written countless referrals for his attitude and behavior, he has stomped out of my room when angry, and we have both engaged in an endless power struggles. Brent has also come to me for help and advice, he has found his voice in his writing, he has planned his future, and he has discovered a confidence in himself in the classroom that matches his confidence on the basketball court. "This is for you," Brent smiles, tilts his head, and walks back to his seat on the other side of the church, leaving me with a rose, one precious rose. Transparency is all it is cracked up to be.

It is now 5:30 in the morning. Damn. Stupid birds are chirping outside the window already! I am still tired but have burned off some energy so that I can go back to sleep for a few more hours before graduation this morning at the amphitheater where I hope the clouds hold off until the students get their diplomas. It is going to be an emotional morning, one which I have experienced before, one which takes on different shades of meaning every year, one which makes me feel younger than I was two hours earlier, one which gives me hope that I can do this a while longer. 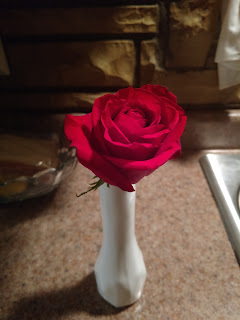