CHAOS, CONFUSION, CCHS, AND A TOUCH OF CLARITY 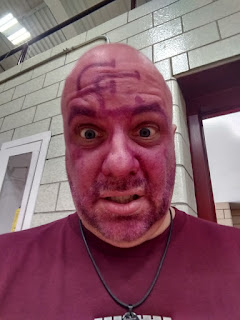 It is Friday. I am standing in front of a porcelain sink in the men's restroom at school, lifting my head to the mirror in front of me and beginning to wonder to myself, "What am I doing with your life?" Sighing, I fill my palms with icy water spraying from the faucet, splashing it on my maroon head. I take some dabs of foaming soap from the adjacent dispenser then begin to lather it all over my cold face, slowly removing the spirit paint. How did I arrive at this point? Why is my face in such a bizarre and disturbing condition? Why am I here in a school bathroom at 2:30 on a Friday afternoon when most of the more sensible people have vacated the premises? I need to retrace my steps, travel backwards in time from this day to one nearly seven days earlier.

Central Catholic High School emptied quickly this afternoon, the students sprinting to their cars after the pep rally to close out the school day before the state championship game the next evening. The students, the teachers, the family members, and so many other guests radiated the anticipation of the first state championship game at CCHS since 2011. The pep rally was a traditional "family" affair. The cheerleaders performed the routine destined for their own state championship the following weekend, the school sang the fight song two times, Coach Young inspired the throng with his emotional and spirited pep rally speech, and the student body just cheered and cheered. Everyone did their part; I did mine. 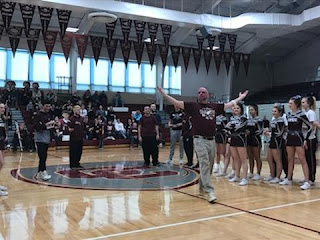 Honestly, I don't understand what I am doing half the time; sometimes I find myself in the middle of a situation and begin to question my motivation. I suppose it is akin to gaining awareness in a dream then desperately wanting to wake up. Anyhow, earlier in the week I had asked to have a part in the pep rally to bring our No Shave November to a close. We had raised so much money for the Schiffler Cancer Center at Wheeling Hospital, and I was incredibly proud of the students involved in this project, an effort to raise money in honor of those in the CCHS family who had fought cancer throughout their lives, an effort to make sure those in the future could fight the same way if tragically called upon to do so.

I was so nervous talking to Rob, the SGA president and pep rally announcer. I was worried about going out there during a pep rally before the state championship, so it was a good thing my face was already painted red. The Central family seemed to love it though because we know the importance of helping others in need even when we ourselves are on the verge of greatness. Nothing beat standing by Ian, Rob, Connor, and Luke, the four students who inspired me to jump in and help out with this worthwhile cause, convincing me that it was not just about coming to school unshaven for a month. I announced the large amount we had raised to thunderous applause from everyone in the gym, turning over the microphone to the guys to announce the winner. Of course, I did my "strange humor" thing, switching the envelope with the winner of the best beard with a "planted" envelope that actually had my name in it. The shocked, exasperated expression on Ian's face as he read my name was CLASSIC! The boos were absolutely glorious as I basked in my new-found villainy, stealing the award from the true winner! My dark acclaim proved short-lived as our principal Becky Sancomb stepped in to right this wrong. Nothing beats a good kayfabe, right? 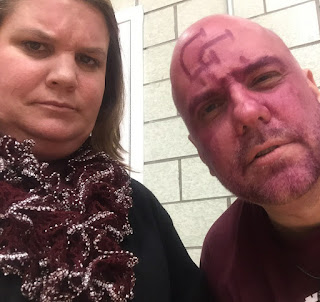 By the time eighth period arrived nearly an hour earlier, I was ready to go to the pep rally. Ring the bell, Becky. Send us to homeroom. Get this show on the road. No luck though. Not for me. My eighth period AP English students wandered in looking tired and ready to go as well. They knew what was coming though; the students who had avoided me all day  entered as I insisted that each senior put some maroon spirit paint under their eyes before the pep rally. The eye rolls of cynical teenagers are truly precious, aren't they? Of course, they turned this all back on me. I was so tired. I had no energy to resist.

After I had drawn lines on all the brave souls who begrudgingly succumbed to cheers of their friends, Owen asked me the question which led to my becoming a hot mess of maroon spirit paint. "Hey, Bucon. Can I paint a CC on your head?"  You see, I am slightly bald so people love to make bald jokes.

Shortly thereafter Owen had drawn a crooked CC atop my head that looked like a damned swastika from certain angles. I could not walk to the pep rally like that, but I was not confident I could clean my head so my group of seniors, God love them, suggested that I just smear the CC on top of my head and start again. One thing led to another and they kept finding more and more ways to paint my head, each taking turns preparing my pate for the pep rally. I should have just have stopped them, gone on with my planned vocabulary enrichment activity, but I really don't know what I am doing sometimes. Yep. Hot Mess! 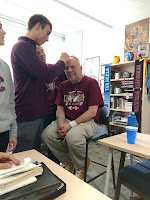 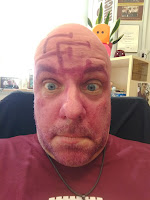 As I continue to retrace my steps I head back to the previous day which had concluded with a press release event at Wheeling Hospital with Doctors Merrick and Georges. Ian, Connor, and I were representing the school for No Shave November. At the beginning of the month Ian, Connor, Luke, Rob, and I sat down and hammered out a plan to raise money for Wheeling Hospital's Schiffler Cancer Center. This was the culmination of a month of serious and funny announcements, examinations of continually growing facial hair, and days of collecting money from sponsors and voters.

We all did interviews with the press who came to record the presentation of our check for one over thousand dollars, a check which when coupled with matching funds would exceed two thousand dollars. Ian and Connor took turns being interviewed with the two local news outlets present while I spoke with Doctors Merrick and Georges, learning that the money we had raised would be used to help those who did not have money to pay for their own PSA tests and treatment needs. As a prostate cancer survivor myself and knowing that our friend Jamey Conlin had the same type of cancer, I could not escape the importance and significance of what had happened this month. 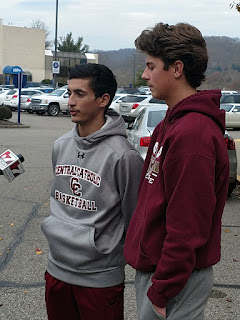 Taking a break from our conversation, I looked over to see Ian and Connor, adorned in their maroon, doing their interviews with WTRF and WTOV. I struggle sometimes finding words that reflect the understanding and insights in my heart. I hear my students. They speak of "family," "loved ones," "Conlin." They are nervous, but they finish the interviews, realizing for themselves the importance and significance of what we had accomplished.

I had sped to Wheeling Hospital with Becky shortly after returning from the CCHS Canned Food Bag Distribution Day. We were both dead tired, having traversed neighborhoods in the hilly area near Park View and Springdale. Every year CCHS does this as maroon clad students travel throughout Wheeling distributing flyers and bags which will be filled with canned goods and other food products to be collected on December 9th and taken to Catholic Charities as part of their biggest food collection of the year.

It is an opportunity to work side by side with our students, and while serving a vital purpose in the community, it is a chance for us teachers to learn more about our students, ones who may one day be inspired to lend a helping had on their own, ones who may become those seniors who will see the need to raise money for a worthwhile cause. 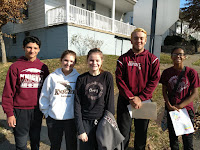 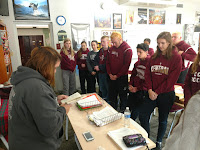 So we walked those hills Thursday morning, placing those bags carefully at each door, checking the map to make sure we were covering our designated areas, referring to street signs so we would not become lost. As I recall each sign post we read, as I rememberthe laughter and camaraderie, a touch of clarity develops.

I continue travelling backwards through the earlier part of the week which was filled with the anticipation for the bag delivery day, the pep rally, and Saturday's game. I am proud that I managed to have some productive classes this week, but this part all becomes hazy and confusing for me because at the time I was so driven, so determined to accomplish something, to be someone, to affect my world in a manner which is difficult to articulate.

So I fly through Wednesday, Tuesday, and Monday, arriving at the previous weekend for the opening act of some play that ends with my washing maroon spirit paint from face at 2:30 the following Friday afternoon. This is my life; it was what I do. Like so many others, I search for some meaning, questioning when it will eventually reveal itself.

Last Saturday I stood on the stairs at Bishop Schmitt Field at Wheeling Jesuit University Stadium watching the Maroon Knights football team punch its ticket to the state championship. The air had grown chilly and I was totally under-dressed, so I stood close to the press box in a futile effort to stay warm while continuing to watch the game. It was there that all of this chaos began for me; it is there that I have gained clarity.

The maroon was everywhere. Everywhere. The overflowing stands surrounding the sunlit field, the area behind the press box where spectators gathered to laugh and talk, the concession stand which sells killa taco-in-a-bag. Sometimes we need to take a moment to absorb the community in which we live, the heartbeats of the past merging with the heartbeats of the future. I gazed through the crowd behind me, one which was filled with former students I had taught last year as well as those who sat in my class five years ago. Alumni, current students, and family members huddled in the seats watching the game unfold, supporting their knights until the clock signaled that no time remained. On the field, decades of tradition coached current carriers of that same banner.

I saw Chance Siebieda down there. I met him my first year teaching at Central. He was a classmate and friend of my niece Emily, both members of the CCHS Class of 2013. Chance was a remarkable student back then and probably a fantastic coach now. Chance will deny the first characterization, but I personally know it to be true. As a teacher I could not be more proud to see a student fulfill goals and dreams the way someone like Chance has. As the years wind away, I tend to become caught up in the chaos and confusion around me, not embracing those moments  in front of me that emanate a rich understanding of life. This past Saturday I felt the traditional nature of community, that which allows the past to live again in the present, that which affords the individual a glimpse into the impact and connections he or she has made, that which joins generations and ideology together as a book cover which protects pages of stories once told and those yet to be read.

I return to the porcelain sink in front of me, drawing more of the icy water into my palms. I look up in the mirror and slowly begin to remove the last vestiges of maroon, knowing that some will always remain. 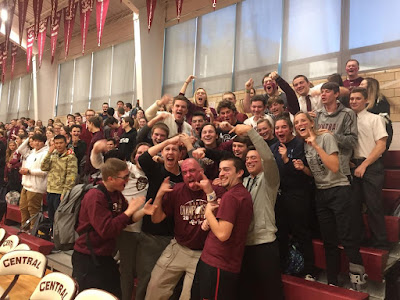