IN THE DARKNESS, LIGHT 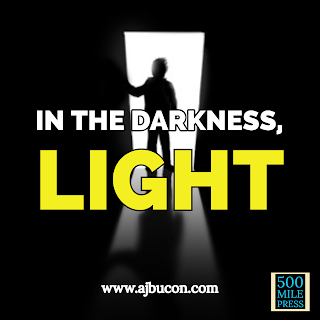 One morning somewhere in the nexus of Daylight Savings Time when the world was springing forward from a November that had fallen backward, I swiped my fob on the outdoor keypad at school, entering the small, dark elevator foyer into a world in which time celebrated its inconsequential victory over someone who had lost the ability to distinguish the past from the future.
My black jacket, drooping on my sagging shoulders, covered the wrinkles in the khakis and unpressed shirt I had worn two days earlier. A dark toboggan and black Under Armour mask swathed my entire head except for my eyes which locked onto the glow of my cell phone. As the elevator slowly ascended from the first floor to the third floor,  I checked my text messages, my email, and all of my social media, looking for a tidbit of light to start my day. I remained focused on my cell phone, reading the last of the emails I should have read days ago as the doors to the elevator slid open into the third-floor elevator corridor.
I had no sooner left the elevator, my head still fixated on my phone, when I found myself jumping, grabbing my chest to capture the breath I expelled, and yelling, "Ahhh! Oh! Shit!" A dark figure stood in the shadows of a gray morning light emanating from the only window in this corridor. Childhood nightmares of discovering a fanged clown under my bed or a lead-footed boogeyman in the closet poured back into my adult psyche, assuming their grip on my soul once again. I tinkled a little, too. Just a little, not a lot. Enough to make me uncomfortably check for wet spots.
I pushed myself up against the adjacent wall as I switched on the phone's flashlight. I uncomfortably examined the figure from a distance as I slowly moved the light up and down. "Damn it. Shit," I grunted. "It's Joseph holding Baby Jesus." I took a picture while I laughed and attempted to catch my breath. As I rushed to my classroom, an uneasy feeling remained with me throughout the morning as I warmed the cold chills of fear out of my body. 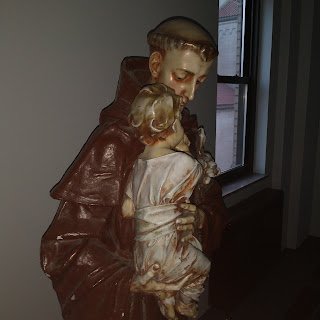 As I left school at the end of the day, I ventured back to the elevator. Since I had become despicably lazy over the past year, voices told me to take the stairs as a futile means of exercise after a day of sedentary activity. I ignored those voices, wanting to address my need to confront the statue. Not confront Baby Jesus or Joseph. Just the statue. Confronting Joseph and Baby Jesus is disturbed and would only add fuel to gossip around the school that I have not "been right" since the pandemic began.
Those multiple cups of coffee and stacks of research papers had ignited small vestiges of critical thinking as I examined the statue for what it was. I can see why I was startled early that morning. The statue stood nearly my height and had been placed uncomfortably close to the doors of the elevator. Sure, it was far enough away from the doors so that a person would not walk directly into it, but it was definitely close enough to scare the shit out of anyone who was not paying attention. And now I did not think that was Joseph or Baby Jesus. Joseph had that circular, self-inflicted bald spot atop his head and Baby Jesus did not have that holy glow or halo around his tiny head. It was probably Saint Francis of Assisi and a child. Shouldn't that be a baby deer, raccoon, or some other small animal then?
Clearly, I am still obsessed with this statue. I recently started a small group text of people I thought would know the identity of the statue. According to the Catholic Online link a member of our group sent me, this statue is of Saint Anthony of Padua who is traditionally seen holding - Baby Jesus.😨 I am a failure of a Catholic who is teaching Catholic children in a Catholic School. Do not tell the religion teachers or my mom. The guilt! The Catholic guilt!
Saint Anthony. Franciscan Friar. Man of poverty. Speaker to fish. This is who scared me this morning.
As I was reading about Saint Anthony on this website, I discovered an intriguing tale about him – a fish tale, if you will. 🐟🐠🐟🐟 As the story goes, a group of heretics would not listen to Saint Anthony as he attempted to talk to them, so Saint Anthony chose to "preach his message to the fish."  He did this to calm his own heart while giving glory to God. (Fascinating and quite cool, right?) According to the story, fish began to gather around him in the water, inspiring the people who refused to listen to Saint Anthony. I guess if the fish were listening then perhaps they should give Saint Anthony a listen.
Saint Anthony? He is recognized as the Patron Saint of Lost Articles: lost things, religious articles, and, of course, lost people. Oh, the irony.
I took the stairs and walked outside to a chilly, sunny afternoon. I carried my black jacket at my side, practically dragging it along the sidewalk. My cell phone remained in my book bag as I walked to my car with my head up thinking about tomorrow. 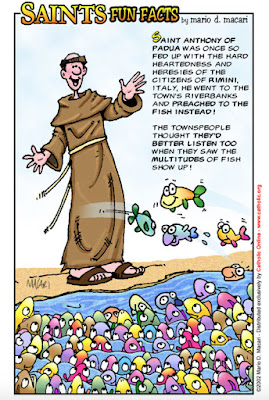