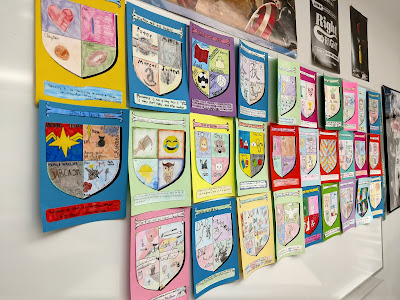 My English III students and I became engrossed in words like these as we began our exploration of The Legend of King Arthur several weeks ago. The magic, pageantry, and violence at the heart of this legend is enough to hold the interest of any of us; however, our journey took us beyond the legend itself, into a space in which we could honestly examine the code that the king, the church, and the knights themselves upheld as the ultimate pursuit. We asked ourselves if these qualities are ones which our present society continues to admire and whether or not each of us incorporates them into our lives through our own behavior and choices regarding who is seated at our own round tables.

As we began our nobility project, we had to gain an understanding of certain words beyond the dictionary definitions. Students these days can Google a definition in a heartbeat, but I asked them to provide a real and honest extended example of how they understand the meaning of each word. Unfortunately, I did receive many "I don't knows" initially. We persevered, having serious and humorous discussions about how they treat friends, the way they engage one another in social activities, the tone in which they speak to their parents, and the manner in which they speak to adults and strangers. Through these discussions we arrived at words like respect and honor.

As we dug deeper we rediscovered words like perseverance, determination, honesty, and compassion. Again, we can all define them, we can Google a quotation about them, but can we identify real-life examples, not those on television or in movies, but actual people in our lives who epitomize the best of these qualities? Can we articulate thoughtfully and confidently how we determine whether or not another person possesses these qualities? Can we look inside ourselves and recognize the qualities we are lacking?

We set about creating our own round tables. My students were not going to simply slap some names on a crest, color it, and move on. They were considering qualities important to themselves, reflecting about which people in their lives best exemplified these abstract words, narrowing down choices from across their spectrum of friends, siblings, mothers and fathers, teachers and coaches. I explained that this table could be one where every person could literally sit there, much as a group of friends would sit at a table in the cafeteria or a family would sit at the dining room table. I reminded them that they could also expand their vision, seeing people sitting at this table from across state lines, from different aspects of our lives, or from the great beyond. 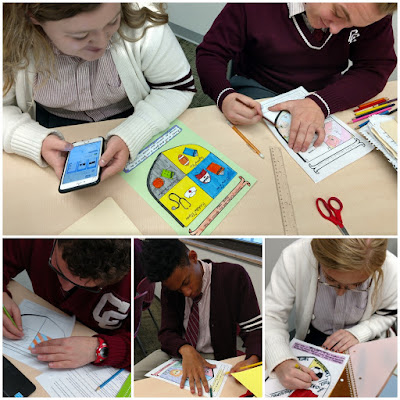 Ultimately, I wanted my students to see that each and every one of us has a choice about the person he or she wants to be. We have a choice to surround ourselves with people who espouse the values that we hold to be worthy of ourselves and of our society. We also bear a certain responsibility unto ourselves and society when we permit people to sit at our table who do not represent the qualities which we uphold. I do not ask them to indiscriminately toss aside people who are not as trustworthy as they should be, those who are not compassionate towards others, or those who lack respect towards other people. I ask them to hold them accountable. If we believe in qualities like honor, honesty, compassion, and dedication, then we must foster them in other people through encouragement and modeling those behaviors ourselves. People who are off track, who lack direction, or who need guidance are able to make better choices; eventually, better choices may lead them to a place which allows them to make the world a better place.

Our world has become an understood cacophony of influences. When I grew up in the Middle Ages, we had three to five television channels depending on how we adjusted the antenna(class, that was a wire contraption we put atop a big box of an old-timey television). We did not have cell phones and computers with instantaneous text messaging. We did not have Facebook, Instagram, Snapchat, and Twitter. Those social media accounts were never available as a means of expressing ourselves, never an opportunity to reveal our character (or lack thereof), never a tool to make the world a better (or worse) place. Yet, here we are with more weapons than a knight ever had to represent that which is right, that which we should aspire to be.

The wise Merlin made sure that King Arthur had Excalibur to wield as the king of the land. Merlin guided his young charge who pulled this magical sword from the stone, expecting him to grow into the type of king who could unify the people. As I look at our Wall of Nobility spread across the white board in our classroom, I see a group of incredible students in the pictures, good souls living amidst the qualities they attribute to the people seated at their round tables. I see a group of young men and women who face a life whose quality and success may rest on the people they have seated at their table and those who may be added in the future.

Each student will stumble and fall as we all do throughout life, learning to rise again and again. All of them will seek guidance and positive encouragement from the people around them whether they ask for it or not. Each one possesses his or her own Excalibur which offers the potential for greatness. As a society we must do more than hope our young charges and their Excaliburs are imbued with noble qualities. How will qualities like honesty, pride, perseverance, respect, and compassion remain intrinsic parts of our young people and who we need them to be if we do not nurture them every day? 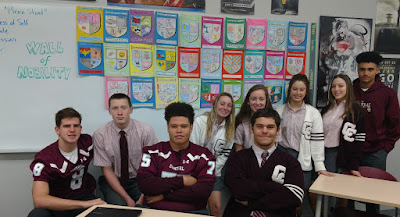 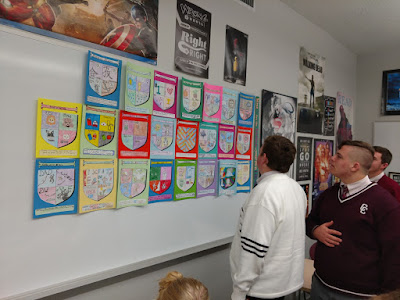 SHAMELESS BOOK PLUG 😀
I am still receiving positive feedback about my book My Corner of the World. Thank you so much to everyone for your continued support. If you picked up your book on Amazon, I would greatly appreciate a review if you have the time. If you live out of state and are interested in a signed copy, there is a link at the top of my website. I am always humbled to sign anyone's book. Just contact me if we need to connect to do so. 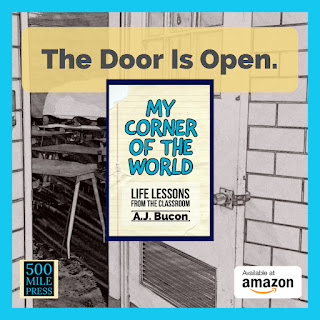