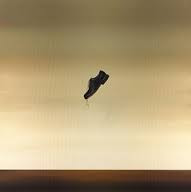 Idiomatic expressions weave their way through so many avenues of our lives, representing societal values or traditions in a figurative way. If you are curious about a friend's furrowed brow, you smile, lean in, saying, "a penny for your thoughts." When people around us, our children, students, adults, politicians, promise to change their behavior, to fulfill a promise they have earnestly made, we tend to tilt our heads, grin, sigh, and remind them that "actions speak louder than words." Idioms. They are everywhere, free for us to use to capture our thoughts or feelings in a certain moment where we may not be able to find the words to articulate to another. There is a commonality in words, particularly when they are placed together in these phrases.

This past week one expression captured the instinctive reflex of each breath I have taken. Unfortunately I have slipped into the mindset of "waiting for the other shoe to drop." After waking up from a desperately needed rest Friday night (one which I am not 100% sure I had), I began my late Saturday morning ritual of cleaning up the mess I made of my school backpack as well as the collection of mismatched shoes and socks strewn around my bedroom. Cleaning and reorganizing my crap is therapeutic for me, allowing my mind to process my thoughts while conducting basic tasks I have done repeatedly all of my life. That is when I realized the exhaustion I had experienced at the end of the week originated from "waiting for the other shoe to drop." As typical for me, I wanted to know the origin of the idiom, so the dirty food containers remained soaking for a while.

The best origin I could find for this expression is at the website The Gothamist. During the manufacturing boom of the 19th and 20th century apartments built in NYC were all designed much as they are today, one bedroom atop another. A tenant would come home from a hard day at work, go to bed, anticipating the person above him removing his shoes and dropping them one at a time on the floor, generating a thud whose daily repetition could prevent anyone's restful night of sleep from ensuing until the other shoe "dropped." Hence we have that expression which  means  an anticipation of something bad or negative to come after an initial warning or sign.

It has been a tough week. The staff at Central Catholic High School where I have been teaching for five years was informed of the decision to close our sister-school Bishop Donahue on Thursday. That is tough one, even for a Central grad. I know the pride and tradition associated with a school like Bishop Donahue, I know the cost parents incur to send their children to a parochial school, I know this first hand as a child of parents who saved to send me and my brother to parochial school for twelve years, and I know it now as teacher who talks to parents who want to send their children to Central because of the values of God and family. So when we learned of the closing, we were saddened because we think we know what the students, teachers, parents, and alumni must be feeling. We really don't though because it is not happening to us; however, it does give us pause for thought about how we would feel were it happening to us.

Another part of the tough week for me was the inauguration of Donald Trump. I am not attacking him. I promise. My anxiety is rooted in an exhausting election process during which both sides threw enough mud to have left lasting stains on me as a citizen. We continue to experience difficulty as a nation moving beyond all of this. That is not to say that people do not have a right to be frustrated any more than people do not have a right to be excited. For me, there is an anxiety that I cannot shake because I do not know if we can move forward without the feeling of "waiting for another shoe to drop." I will pray that my anxiety will quickly be relieved, realizing that it may take some time.

Finally, the weekend concluded with a colleague at Central perhaps no longer being with us. The circumstances were unknown to me. I was worried. I was lost. I was confused. I popped in a Jason Bourne movie to distract myself but could not escape the concerns and questions that vibrated my cell phone. I am typically a loner and can do the "sulking in solitude bit" better than anyone, but tonight I had to go be with colleagues, with friends. That's where this week had taken me. That is where the week had taken many of us.

So here I am "waiting for the other shoe to drop" in life. The unexpected is expected, right? We all know the unexpected is there waiting for us, but we can never prepare for it because we simply have no idea what will occur. The one option we have is to acknowledge others that are here for us. The Bishop Donahue community has not only each other on whom to depend but others nearby who are sympathetic and willing to help. The country, despite its divisions, has the potential for unity buried deep inside, but we need to tap into our empathy while carefully tuning out incendiary rhetoric. We truly do not know when that other shoe drops, but I do know we can all be there when it happens to someone we know. 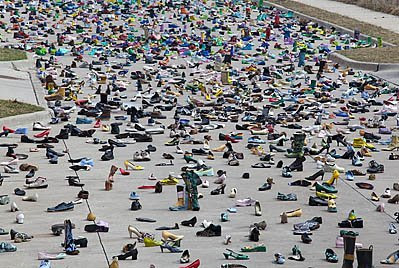 Both images on this page are from Google Images.